Iliotibial Band Syndrome (ITBS) is one of the most common overuse injuries among runners. It occurs when the iliotibial band, the structure that runs down the outside of the thigh from the hip to the shin, is tight or inflamed. The IT band attaches to the knee and helps stabilize and move the joint. When the IT band isn’t working properly, movement of the knee (and, therefore, running) becomes painful. Any sport that involves running can cause this injury. 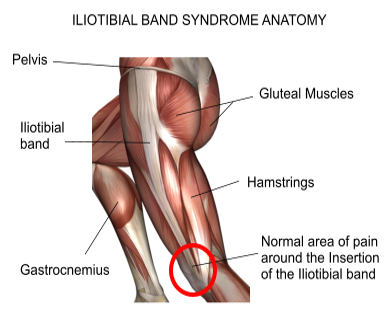 The main symptom is swelling and pain on the outside of the knee and is easily confused with a knee injury. A simple test is conducted to discover if it is ITBS called the Ober’s test.

Additionally, sometimes an MRI can confirm whether your injury can be diagnosed as ITBS. An X-ray will usually produce negative results, but an MRI can show a partial thickening of the band, which results from inflammation.

Common causes of IT Band Syndrome:

ITB syndrome can result from any activity that causes the leg to turn inward repeatedly. This can include wearing worn-out shoes, running downhill, running too many laps of the track in the same direction, or simply running too many miles. Arch disorders are considered to be a risk factor for ITBS.

When the iliotibial band comes near the knee, it becomes narrow, and rubbing can occur between the band and the bone. This causes inflammation. Iliotibial Band Syndrome is more common in women, possibly because some women’s hips tilt in a way that causes their knees to turn in.

> Injection or surgery as last resorts and if all other treatments have been exhausted.

Here are some steps you can take to prevent iliotibial band syndrome:

> Warm up before every training session

> Make sure you’re trainers are not overly worn out. Trainers only last for 500 miles on average.

> Run on flat surfaces and try to avoid too much running on concrete. If running on track vary which direction you run

If you need any corrections at the foot, wear orthotics insoles. At David Brown Podiatry, we recommend a neutral trainer and a bespoke insole, rather than anti pronatory or anti supinatory trainers as they are guessing the amount of correction you need.